The project group NESTINBOX, has together with handpicked civil engineers worked through a concept where small homes are built on vertical rock walls instead of on the ground. The houses are then mounted in a suspended steel construction – which can soon be carbon dioxide-free.

The Nestinbox project received financial support in 2018 of 136.000 € by the Swedish National Board of Housing, Building and Planning within the framework of “Innovative and sustainable construction of housing” to develop the concept. The investigation has now been completed and reported in a comprehensive report, including drawings and descriptions, and the project has recently also been reported in a meeting with a group of experts at the National Board of Housing, Building and Planning.

“We were asked to also present the project orally, which was flattering because it is not commonplace when reporting a project like this. They really wanted to hear about what we have come to, ”says Pontus Öhman, project manager and one of the architects behind Nestinbox.

The project group has put a lot of work into investigating and verifying the environmental consequences of building houses in this innovative way.

“The very basic idea in the first place, is to densify urban structures – without using valuable land – and then of course, as much as possible build with materials that are as renewable, locally produced and non-toxic and have low emissions of carbon dioxide equivalents “, Says Pontus and continues:  “We have made an LCA calculation, which means a life cycle analysis, for an imaginary Nestinbox and we see that the steel structure that is mounted in the rock wall is the building component that accounts for by far the largest share of carbon dioxide emissions. Therefore, it is extremely gratifying that the steel industry, with Sweden at the forefront, will soon be able to produce fossil-free steel; in our case, that would mean reducing the value of CO2 equivalent emissions for the whole building by 45%. ”

The next phase – commercialization

There is no doubt at all that the concept works technically according to the project group.

“We have had many creative meetings for just over a year,” says wooden house manufacturer Michel Silverstorm” and now we have it in black and white; this is not “rocket science” in any way, it is actually quite easy to build and assemble a Nestinbox if you only know how to do it, and now we know. I definitely believe that there is a commercial potential in this. The interest from around the project group in being able to live sustainably and utilize land that no one thought was buildable has been great. It is clear that it will initially be more expensive to build a Nestinbox than to build a regular house, but the first Tesla that was built wasn’t cheap either.”

The project’s website, nestinbox.se, is now updated with new material and you can also download the report in its entirety, with certain appendices, for those who are interested.

Nestinbox is an idea project started in 2017 by two architects and a prefab wooden house producer. The purpose was to find a new way to build small smart houses without affecting the environment more than necessary, and saving valuable land. The concept is to install small residential buildings in a steel structure on “vertical ground”; i.e. on vertical rock walls in or near urban areas with already existing infrastructure.
In 2018 the project received a financial support of 1.5 million SEK. by the Swedish National Board of Housing Building and Development to develop and investigate the project’s sustainability within the framework of “Support for innovative and sustainable housing construction.”

The initiators have now engaged a number of technology consultants with cutting-edge expertise to verify that the concept is feasible and what the consequences will be technically, economically, aesthetically and not the least; what will be the level of sustainability, if the basic principles of the project are fulfilled.
The creators of the concept are the architects Elisabetta Gabrielli/ARCHIGROUND and Pontus Ohman/LUMA Design, both with their own companies in Milan and Stockholm, and Michel Silverstorm, CEO of Moderna Trahus i Norden AB. To assist in investigating the technical issues, Tyréns has been engaged for steel and frame design as well as for electrical design and calculation, Bengt Dahlgren AB for HVAC, Ramböll for fire protection issues and Torkel Oste Fastighetskonsult AB for investigation on property development and planning issues. The group has also consulted Tove Malmqvist Stigell, senior researcher and associate professor at the Department of Sustainability at KTH, for advice on sustainability issues.
The project manager and responsible for the project is Pontus Ohman.

The technology group is now compiling drawings and documents while the architects are producing drawings on the design and documenting the facts. A solid final report with a lot of graphic material and a descriptive study text is promised until autumn 2020.
The documents will be published in selected parts on the project’s website this fall, a website that poetically ends with the words: “Let your thoughts have wings and imagine the possibility of living as a bird!” 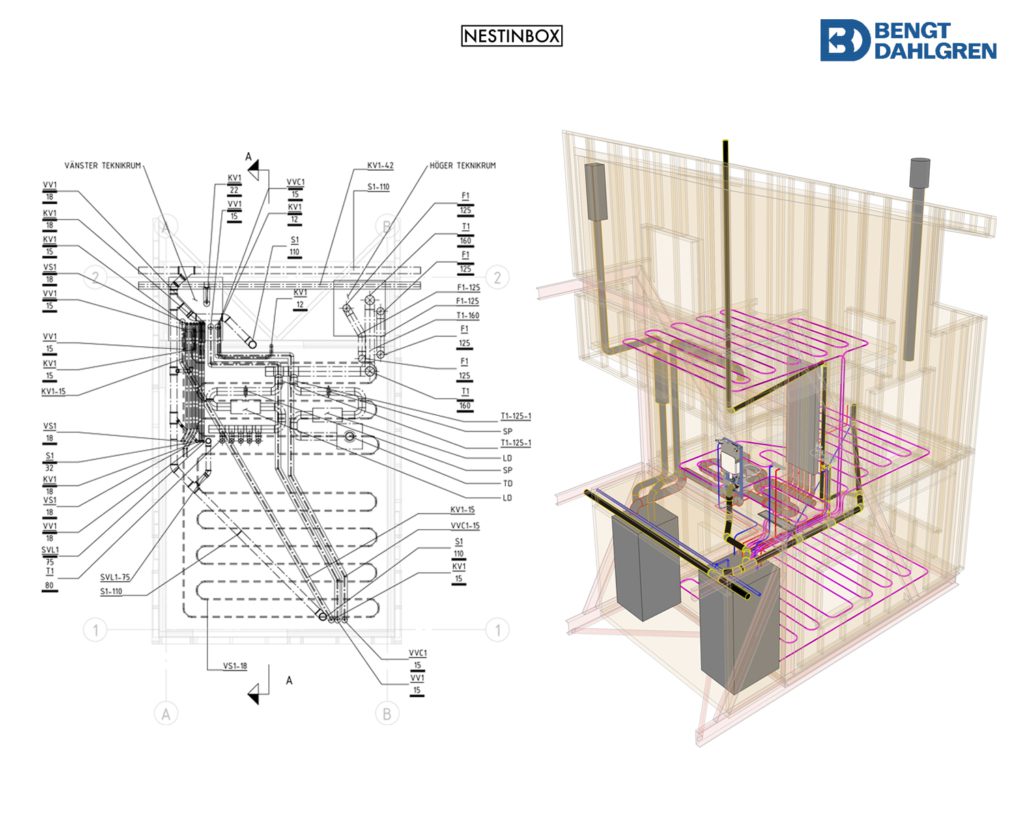 Now we start the project with the “ciff hangers”- housing on rock walls!

NESTINBOX © is an idea project for the construction of small smart homes on rock walls that were launched in 2017 by the architects Elisabetta Gabrielli and Pontus Ohman together with the wooden house manufacturer Michel Silverstorm. The concept received great international attention when it was launched, and just before the turn of the year, the project received a development aid from the Swedish National Board of Housing, of 147.000 € within the framework of the call for support for “Innovative and sustainable housing construction”.

– Really great we got this support; now we have opportunities and resources to be able to develop and test the viability of our ideas to be able to build on “vertical ground”, says Pontus Ohman, architect at LUMA Design, and project manager for NESTINBOX. – In larger cities, buildable land is in short supply and is demanding high prices, while the need for new housing is constantly increasing. In our project we want to show the possibility of building above the ground! Pontus continues.

NESTINBOX is a smart and resource-efficient wooden house that does not require land to build on – in the true sense; The idea is that you try the possibilities of building on vertical rock walls. The house thus becomes a new way to technically, in detail and in terms of design create small homes in areas that would otherwise be difficult or impossible to build. In this way, the initiators of the idea project want to draw attention to the housing shortage and inspire new thinking in order to find alternative ways of managing land and housing construction and also to reflect on new opportunities to reduce the human ecological footprint.

– In our proposal, we have created a compact but complete housing for 1 – 2 people where the house practically hangs in the air, anchored in a rock wall. The house has a smart floor plan in 3 floors, a living area of almost 50 sqm and corresponds to an apartment of 2.5 bedroom apartment. Perfect for a young couple and for students with slightly lower claims on living space. says Elisabetta Gabrielli, now active in the architect collective Archiground based in Milan.

Michel Silverstorm, CEO of Moderna Trahus AB continues: -Really exciting that we now have the opportunity to develop our ideas with accurate calculations, both in terms of technical strength, production technology and construction costs. Eventually, we also aim to implement an LCA (life cycle analysis).

This Sliding Bar can be switched on or off in theme options, and can take any widget you throw at it or even fill it with your custom HTML Code. Its perfect for grabbing the attention of your viewers. Choose between 1, 2, 3 or 4 columns, set the background color, widget divider color, activate transparency, a top border or fully disable it on desktop and mobile.
Go to Top